Iran’s implementation of both feed-in-tariff scheme for renewable energy providing for high tariffs and a guaranteed power purchase agreement (“PPA”) with a 20 year term, together with its strategic geographic location and ideal climatic conditions has, in recent years, put it at the top of the list of emerging markets for renewable energy

High potential – successful commissioning of initial projects, but targets yet to be met

The number of international delegations visiting Iran and the number of conferences held in connection with the Iranian renewable energy market, alongside the number of construction permits issued and PPAs signed, demonstrate the continued high levels of interest in, and the potential of the sector. The Iranian Renewable Energy and Energy Efficiency Organization announced that it had, by October 2017, issued permits for the construction of approximately 8,000

MWp and entered, by January 2018, into PPAs with a total capacity of circa 2,840 MWp. Moreover, the Organization for Investment, Economic and Technical Assistance of Iran (“OIETA”) has reportedly received until October 2017 applications for licenses under the Iranian Foreign Investment Promotion and Protection Act (“FIPPA”) covering circa €4bn worth of investments. Also in 2016/2017, solar projects with capacities of 21 MWp in Hamadan province, 20 MWp in Kerman province and 10 MWp in Esfahan province were successfully commissioned.

However, compared to the vast potential of the Iranian renewables market and the Iranian government’s target of 5,000 MWp by 2020 (as set out in the 6th Development Plan), the number of energy projects actually commissioned remains low.

Reorganisation of the Renewable Energy Organization

Previously, the specific authority for renewable energy matters was the Renewable Energy Organization of Iran (“SUNA”). It was managed and supervised by TAVANIR, Iran’s national power generation, transmission and distribution holding company. In addition to SUNA there was also the Iranian Energy Efficiency Organization (“SABA”), which was tasked with developing and promoting energy efficiency in Iran.
In 2017, in order to exploit synergies between them, the two organisations were merged to form SATBA, the Renewable Energy and Energy Efficiency Organization, which now sits under the direct supervision of the Iranian Ministry of Energy.

This reorganisation demonstrates the government’s recognition of the growing importance of renewable energy in Iran. 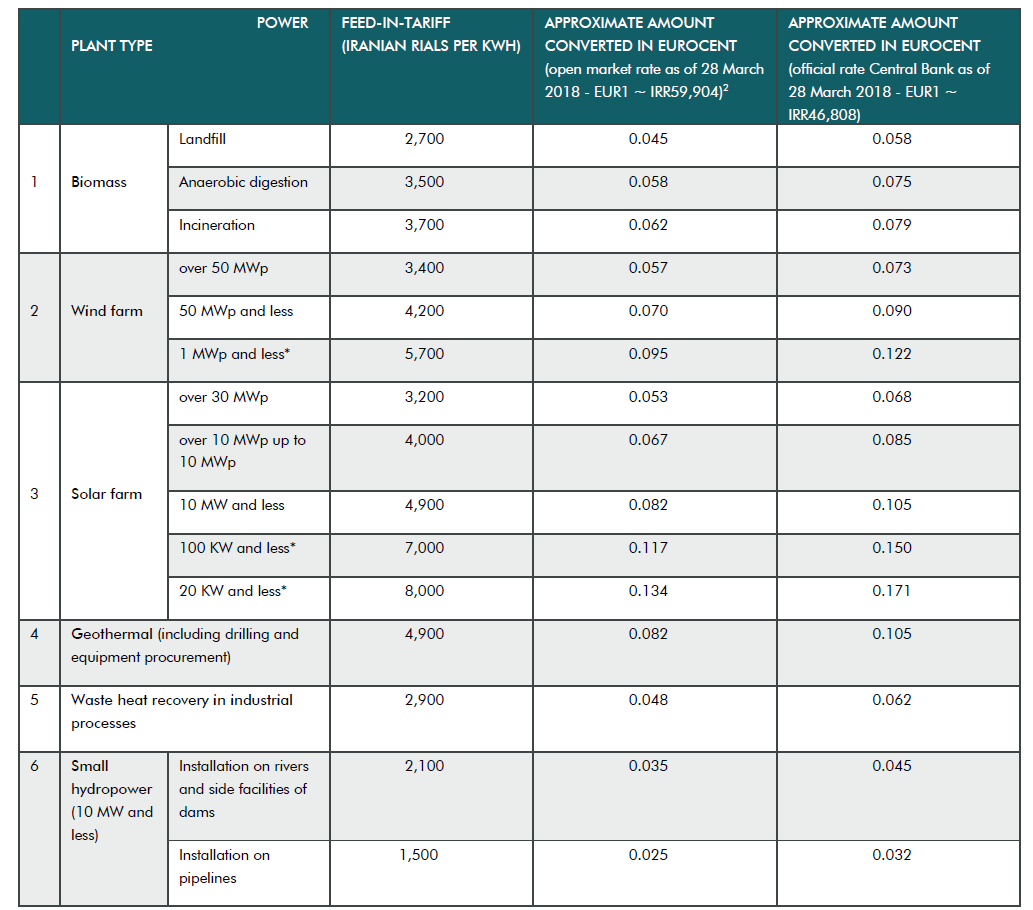 The stability of the Iranian feed-in-tariff regime is to be welcome and market players anticipate that they will remain stable in the pending new Iranian year 1397 (as of 20 March 2018). However, the currency of payment under the PPA is the Iranian Rial, which has depreciated in value against the Euro in the last two years.

Under the Ministerial Directive, the local content bonus was increased from 15% to 30%. Where local technology, design and manufacturing are used, up to an additional 30% applies to feed-in-tariffs. Exact guidelines for the application and calculation of the local content bonus are, however, still missing and will need to be provided by SATBA.

Many sites in Iran suitable for renewable energy projects are on government-owned land. The lease agreements for such sites follow a prescribed template and only limited amendments are permitted to that form. The provisions of the lease agreements raise various concerns and give rise to uncertainty. For example, the extension of the initial term of three years is subject to the completion of a power
plant and the approval of the relevant authorities. In the case of the latter, the criteria and legal process in respect of obtaining said approval are not transparent.
Similarly, the amount of rent is subject to adjustment by the government lessor without any reference to indexation.

In an effort to encourage foreign investment and to address the above mentioned issues, the template lease agreement is currently under revision and will reportedly be approved shortly. We understand that the revisions to the lease template will include a fixed term of up to 23 years and a restriction such that rent adjustments must be linked to rate of inflation as announced by the Central Bank of Iran.

Increase of electricity levy to secure budget The budget for feed-in-tariffs is accumulated by an electricity levy charged to the end-consumer. It was increased from 30 Iranian Rials per kWh to 50 in Iranian year 1396 (which started on 21 March 2017). A further increase of ten Rials to 60 per kWh will reportedly take effect in Iranian year 1397.
Furthermore, it is understood that budgetary allocations to all the various relevant organisations under the Ministry of Energy will be specified in the law and said budget (or parts of it) will be transferred directly to SATBA to ensure the smooth and timely payment of power purchase prices under the PPA.
It is worth mentioning that a draft payment guarantee to be issued by the Iranian Ministry of Finance has been prepared and is in the approval process. The guarantee will secure the payments of SATBA under the PPA, giving additional comfort to foreign investors.

Bankability and uncertainty issues of PPA

A number of bankability issues have been raised regarding the template PPA. Amongst others, the following issues require resolution:

Moreover, there are two exchange rate systems in Iran, i.e. the official rate of the Central Bank of Iran and the open market rate. This raises the question of alignment between the rate applied for the adjustment of the power purchase price and the rate pursuant to which profits can be converted into foreign currency and repatriated by the foreign investor.

the tariff applicable at the date of signature of the PPA and the tariff applicable at the date of operation of the power plant. The deadlines appear, especially for wind power plants, too short, particularly given that solicitation of debt financing can only commence following signature of the PPA. Obtaining debt finance is a time consuming and intensive process in no small part due to the difficulties generally encountered when obtaining financing for Iranian projects. Moreover, the consequence of loss of tariff and application of a future, unknown tariff by the time of operation of the power plant leads to uncertainty and bankability issues.

Extraordinary termination rights in favour of the power purchaser are broadly drafted and weigh heavily in favour of the purchaser.
On the other hand, the PPA does not provide extraordinary termination rights for the seller with fair compensation provisions. Standard international lender requirements, such as cure periods and step in rights, remain absent.

The PPA provides the Iranian courts with jurisdiction over disputes in relating to it. Given that Iran is still a very new market for renewable energy and, more generally, many banks and institutional investors have limited experience with the Iranian judicial system, the use of international arbitration has been suggested in place of the Iranian courts.
However, Article 139 of the Iranian Constitution sets out certain requirements, i.e. the approval of the Council of Ministers and, in certain cases, the approval of the Iranian parliament that must be satisfied before a dispute can be referred to arbitration. Adhering to these requirements presents a challenge.

It should be noted that the aforementioned issues have been communicated to high ranking officials of the Iranian ministries and there is reason to expect that such issues will be addressed during Iranian year 1397.

Despite the relief of sanctions in January 2016, European banks remain reticent to do business with Iran. This affects both the processing of payment transactions to and from Iran, and the availability of long term project financing. However, despite this, a number of small to medium sized banks from Germany, Austria, Italy and France, have started to establish relationships with Iranian banks. Resolution of the outstanding PPA bankability issues may contribute to opening up avenues for renewable energy projects to obtain debt finance.

In addition, Export Credit Agencies (“ECAs”), including Germany’s Euler Hermes, Denmark’s EKF and UK Export Finance, have started to offer guarantees to financing banks. The main challenge to date is the ECA’s requirement for a sovereign guarantee from the Iranian Ministry of Finance or the Central Bank of Iran to secure the repayment of the financing.

The Iranian renewable energy industry has high potential and has gone through an important learning curve in the last two years, which is standard procedure for emerging markets. There have been various initiatives launched in Iran to address the currently existing challenges, particularly with regard to the revision of the lease agreement for government owned land, the allocation to SATBA of the budget accumulated through the electricity levy, the bankability of the PPA and the need for a sovereign guarantee. Accomplishing the objectives of such initiatives in order to implement large scale renewable power plants should be a high priority for Iranian policy makers in Iranian year 1397.