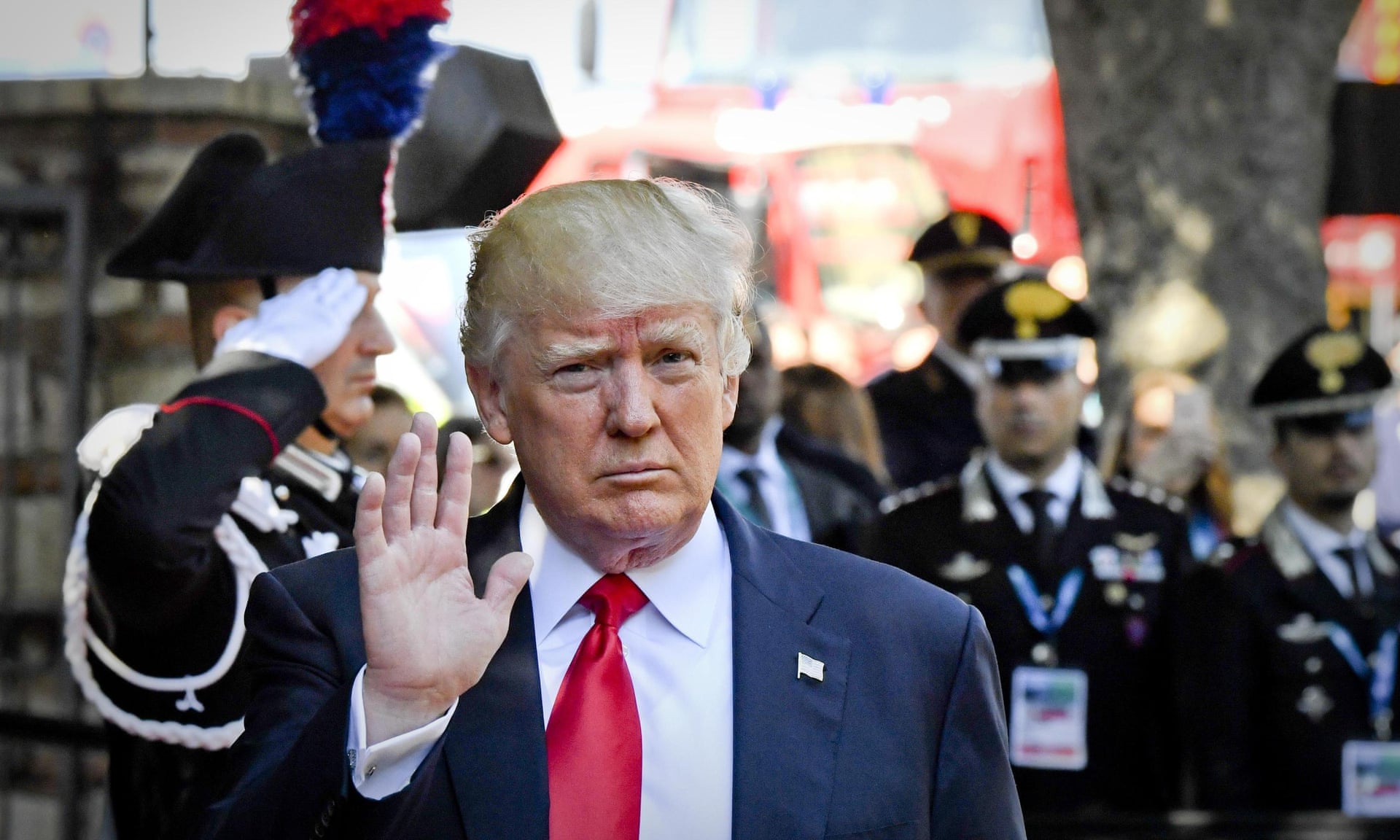 Trump tweeted on Wednesday that he would reach a final decision in a few days, shortly after a wave of reports said he was about to exit the deal.

Donald Trump is poised to withdraw from the Paris climate accord, according to multiple reports, in a move that would profoundly undermine the landmark agreement by nearly 200 countries to curtail global warming.

Trump tweeted late on Wednesday that he would announce his final decision at 3pm ET on Thursday in the White House rose garden. It followed a wave of reports that he was about to exit from the deal. The reports follow his refusal to express support for global efforts to combat climate change at a G7 summit with European leaders last week.

On Wednesday afternoon during a press call with the Vietnamese prime minister, Nguyen Xuan Phuc, Trump was asked if he was leaning toward getting out, to which he replied: “You’re going to find out very soon.”

Asked whether he has been hearing from CEOs and others trying to persuade him on the climate agreement, Trump said: “I’m hearing from a lot of people, both ways. Both ways.”

Shortly before, Sean Spicer, the White House press secretary, said he did not know if Trump has already made up his mind after listening to industry leaders and foreign leaders. “He’s had a lot of input and ultimately he’ll make the decision,” he said during an off-camera briefing that lasted only 12 minutes.

A sombre Spicer told reporters: “I think the president’s comments on this, that he’ll be making a decision on this in the next few days, stand.”

Pressed further, he replied only: “When the president has a decision he’ll make that announcement and he’ll make it clear what the basis of that is.”

Asked about entrepreneur Elon Musk’s threat to leave White House advisory councils if the US withdraws from the deal, Spicer said: “Let’s wait and see what the president’s decision is. I don’t want to get ahead of it.”

The Trump administration has been divided on the issue, with the EPA chief, Scott Pruitt, and Trump’s adviser Steve Bannon among the conservative hardliners who have been in favor of a US exit from the deal. Axios, which first reported on Trump’s intention to exit the deal on Wednesday, said the details were being ironed out by a team led by Pruitt.

Trump has dubbed climate change a hoax, and once tweeted that global warming was a concept “created by and for the Chinese in order to make US manufacturing non-competitive”. The US president nonetheless faced immense pressure during his first foreign trip since taking office to uphold the pact –from world leaders and Pope Francis, who gave Trump his papal encyclical on climate change during their meeting at the Vatican. 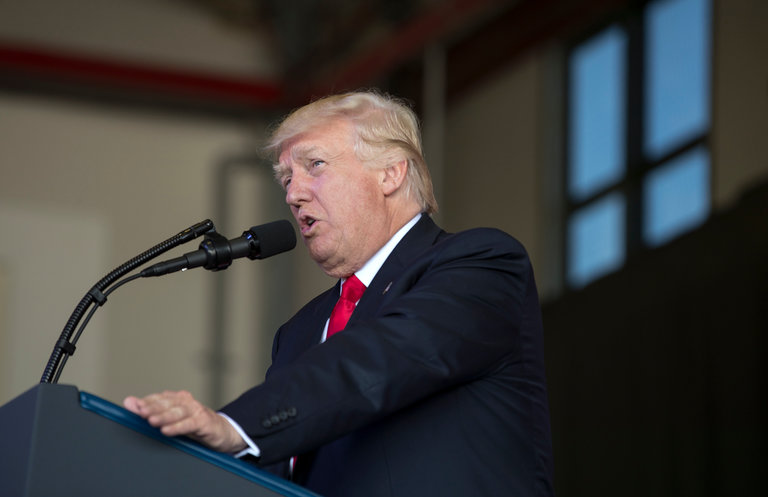 But the efforts to persuade Trump were “very unsatisfactory”, according to the German chancellor, Angela Merkel, who observed: “Here we have the situation that six members, or even seven if you want to add the EU, stand against one.”

As with many of Trump’s major decisions, news of his pending move leaked through anonymous sources that gave way to a reality TV-style narrative playing out before the public. The competing in-house factions were reportedly at war, with Pruitt and Bannon up against Ivanka Trump and Jared Kushner, the president’s daughter and son-in-law, who despite attempts to paint themselves as moderating influences on the president so far have little to show for it.

Some observers interpreted the spectacle as a trial balloon, by which officials were seeking to nudge Trump in either direction based on the reaction in the press.

The environmental activist and author Bill McKibben said if reports were true, the president’s planned move amounted to “an incredibly stupid decision” that would isolate the US not simply among its allies but much of the world. “It ranks right up there with the worst decisions in American political history,” said McKibben, a regular Guardian contributor. “There’s not a climate scientist in the world who thinks his arguments make sense.”

The US ranks as the world’s second-largest carbon polluter, and initial estimates by universities and thinktanks suggest its withdrawal would add up to 3bn tonnes of extra carbon dioxide to the atmosphere each year, raising the global temperature by 0.1-0.3C (0.2-0.5F) by the end of the century. Environmentalists also fear the ripple effect Trump’s decision might have on other major polluters, such as China and India, who have reiterated their commitment to the accord but could be emboldened to walk away in the face of similar action by the US.

The US business community has been particularly vocal in the need to address climate change, which could have a devastating impact on the economy and jobs, according to research. One report, published by Citigroup in 2015, estimated at least $44tn in cumulative “lost” GDP over the next five decades stemming from the effects of global warming. Major American companies such as Walmart, Starbucks and Goldman Sachs have in turn outlined ambitious targets in recent years to switch to 100% renewable energy.

Brian Deese, a former senior adviser to Obama who oversaw the administration’s agenda on climate, conservation and energy policy, said a move by Trump to withdraw from the Paris accord would amount to the US “effectively stepping away from the table at a time when the global rules of the world are going to be written”. 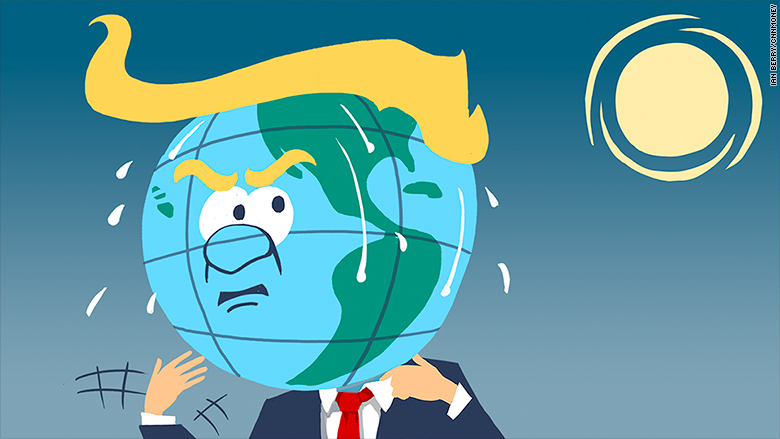 “We have a lot to gain from expanding clean energy and energy efficiency – they are some of the fasting growing sectors of our economy,” Deese stold the Guardian.

Tillerson, the secretary of state, has urged the US to remain in the accord, which is backed by a majority of the American public. And while other countries have vowed to press on, with or without the US, its absence would leave the enforcement of the deal in a flux. The consequences would be especially profound for coastal cities facing rising sea levels, the protection of endangered species, and areas around the world already suffering from heatwaves and food insecurity.

Trump has taken action in recent months to weaken the environmental legacy of the Obama administration by paving the way to overturn rules to curb greenhouse gas emissions and protect American waterways from pollution. During the presidential campaign, Trump pledged to “cancel” the Paris accord within his first 100 days of office.

But Democratic mayors across the US have vowed to uphold the Paris climate agreement, even if the president withdraws.

Responding to reports on Wednesday, the New York City mayor, Bill de Blasio, called the decision to leave the accord a “dagger aimed straight at the heart” of the president’s native New York. “The Paris Accord was the biggest step forward we’ve taken in many years. It’s unconscionable for the president to step away from it,” De Blasio wrote on Twitter. “But we’ll take matters into our own hands.”

At a press call later,De Blasio pledged to sign an executive order affirming the city’s commitment to the accord if Trump pulled the US out of the accord.

During a press conference on Wednesday, Boston’s mayor, Marty Walsh, said that if the White House decided to withdraw, the responsibility to protect the environment would fall to cities. “No matter what the president decides, I want to make it absolutely clear to the White House and our partners worldwide that the city of Boston will not back down.

“We will honor these responsibilities to our children and to our planet and we will do what is right,” Walsh added. “That’s who we are in the city.”

The Los Angeles mayor, Eric Garcetti, a co-founder of Mayors National Climate Change Agenda, has said repeatedly that if the White House leaves the Paris deal, his city will adopt it independently.

The Mayors National Climate Change Agenda sent a letter to the president in March urging him against rolling back US climate policy, including the Obama-era clean power plan, which Trump has proposed defunding.

In the UK, meanwhile, in a televised debate ahead of the country’s general election next week, leading politicians were critical of any US decision to leave Paris. The home secretary, Amber Rudd, said she was disappointed by the expected move.